People of Earth: Shape Up or Ship Out (To a Fresh Planet) 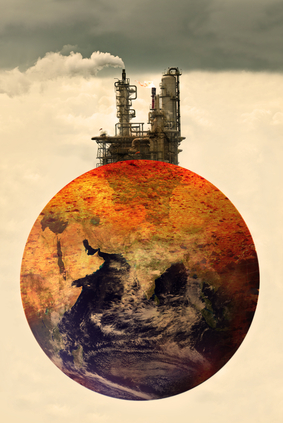 By the time 2050 rolls around, we'll need two more planets the size of earth to sustain our resource-guzzling, chemical-spewing ways, laments the Guardian UK and the World Wildlife Fund. Statistics like this have a tendency to keep some of us awake at night, while it prompts others to just roll theisr eyes or shrug the problem away. The solution, however, is most likely to be found in a happy medium — somewhere between making earth-friendly changes without losing any sleep.

“Reduce, re-use, recycle” may sound like a broken record, but that's because we don't do enough of it. In fact, according to Wisegeek.org, the average American uses 1,600 pounds of trash a year, and many of our landfills are overflowing. Office paper and plastic packaging are the worst landfill culprits, but the damage extends way beyond the unnatural waste that humans produce. The worst environmental offenders are generally large corporations that leave factory and warehouse sites bulging with toxic chemicals. In fact, there are over 1,280 sites in the U.S. as of 2010 that have been labeled as “superfund” sites, according to the EPA (Environmental Protection Agency), which means that they were designated as polluted, unsafe and should be slated for long-term cleanup.

The majority of the U.S. population lives within ten miles of a superfund site, which means, in addition to producing unnecessary amounts of our own garbage, most of us are exposed to other citizen's and industry's gross messes as well. Unfortunately, many issues facing our environment have been politicized past the point of addressing a singular problem, and facts and figures often go to the wayside in the heat of a “right side, left side” moment. It's up to us to sift through jargon and propaganda and realize that behind the political debate, how terrible it would be if we wrecked the most beautiful parts of our world with pollution. As citizens of the earth, we must tactfully show support of reducing waste, chemical corruption and emissions.

Third party remediation companies like Sevenson Environmental have made significant progress in cleaning up previously toxic sites. Since November 2010, there have been significant cleanups on 347 sites, with 62 new proposed clean up sites. However, even with significant cleanup efforts by companies like Sevenson Environmental, lawsuits aplenty targeting polluters and increasing awareness campaigns, we still aren't making progress quickly enough to reverse even a small amount of the environmental damage inflicted on a global scale.

What Can You Do?

Short of donning your personal hazmat suit and undergoing extensive toxic chemical cleanup education, the best way to do your part is to spread the word and be a positive example. The cliché “but I'm just one person, what can I do?” attitude isn't going to cut it when it comes to living sustainably. Simply refusing to buy disposable water bottles, fixing your leaky toilet and not buying products with harmful chemicals makes a huge difference. If you can convince five people to do the same — and educate them about the hazards of superfund sites — then conservation and sustainability will spread like an earth-saving antidote.

David Brand Dave loves the outdoors and sharing ideas with readers on how they can make the most of a camping vacation with the family.