PEAR, CULTURE OF. - The pear requires a good, naturally rich, loamy soil, not however enriched by artificial means, as that would only have the effect of producing a luxuriance of growth that would require much skill and labour to overcome. The pear is cultivated in a variety of forms, according to the hardiness or tenderness of the kind; and the sorts are chosen most suitable to the purposes for which they are intended.

Grafting is the usual mode, and for this purpose two distinct kinds of stocks are used, the one called the free stock or wild seedlings, the other the quince. The first is the most proper for the orchard pear, as this produces much larger trees; the latter is best adapted in general for espaliers, walls, and pyramidal trees in gardens. In planting the pear on quince stocks, it is necessary that the stock should be covered up to its junction with the graft, and, if the soil is not extremely wet, the tree may be planted in the usual manner, so that the upper roots are on a level with the surface of the soil. But with pear trees on the quince it is necessary to form a mound of compost, above half-rotten manure and earth, mixed in equal quantities, which must cover the stock up to the junction of the graft to the letter a in the engraving; and this is made of rich compost in order to encourage it to emit roots into the surface soil, and to keep it from becoming hard and bark-bound. To make this emission of roots more certain, the stem may be tongued, that is, the bark must be cut through upwards from the root, and a slip about one inch in length raised, as seen at b b b b . These pieces of bark must be kept open, by inserting a piece of broken flower-pot or slate. Several of these tongues may be made, and by the end of the first year after planting, every incision will have emitted roots; the stock, owing to its being kept continually moist, will swell and keep pace with the graft, and the tree will flourish and remain healthy. 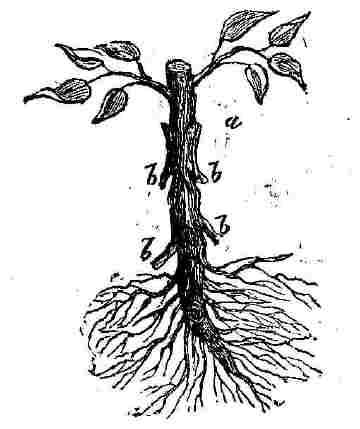 Budding is performed precisely as for other fruits, and for the same purpose as grafting. By this course, however, one year or nearly so may be considered lost, in point of time. Seed is resorted to either to produce stocks or to raise new kinds. The seeds should be washed from the pulp when the fruit is fully ripe, dried and preserved as other seeds, and sown in February following. When it is wished to expedite the process, for the sake of gaining time, with fancy seedlings, the young plants may be sown and reared in a moderate bottom warmth, sowing in January or February, potting off the plants when up, and hardening them off by the beginning of June, when they may be planted out in a warm spot. The best way to prove such seedlings is to plant them on a good bearing old tree, on a quince stock if possible; they will thus fruit in half the time. During the growing period, the chief point is to keep down the watery spray, which is generally produced in abundance. Caution must be exercised in not doing this too early, or the embryo blossom buds may be driven into growth. The best practice is to commence by disbudding in the beginning of May. All gross foreright shoots are stripped away, and several of the more luxuriant shoots when too thick. In a few weeks the shoots begin to lengthen considerably, and their character as to fruitfulness is in some degree determinable.

Very few of our pears bear on wood of the previous year, but a great many shoots plainly show betimes that their tendencies are towards fructification; such should be by all means encouraged. About Midsummer a selection may be made; most of those which look browner than the rest, and are shorter jointed, must be reserved; and much of the paler; longer-pointed, and more succulent-looking spray may be cut or pinched back, leaving about four inches at the base. Those reserved are tied down to the older branches, sometimes in a reverse position. In about a month from this operation, the points are pinched from nearly all the growing shoots; this should be done about the middle of August, and it has a tendency to cause the wood to become highly solidified, and thus induces fruitfulness. After this period, the only point is to pinch the extremities of all succulent spray which may arise. When the summer culture of the pear is properly attended to, but little is left for the winter primer. Nevertheless, tbere is still something to do; some shoots will have escaped the summer dresser, and many "snags" must be cut entirely away. Most of those which had been pinched back three inches at Midsummer, or after that be pruned entirely away. No stump spur must be left, unless a blank space occur. These snags removed, the young tied or nailed down must be examined, and the superfluous ones cut away. Those reserved must be tied down on the old stems, or nailed between them, and little more is necessary until the growing period returns.

The conditions requisite for storing are a rather cool room, and one that is dry. The precise temperature is not quite certain, as it probably differs somewhat in different kinds. The safest would be from 55 to 60 degrees, not more than the latter. It is a common remark that the apple and pear bear well, and the reverse in alternate years. The cause of this, for the most part, is allowing the trees to exhaust themselves, by carrying more fruit in one season than they can well bring to full maturity. The trees become greatly weakened, and the extraordinary draught made by their roots upon the soil in which they grow extracts from it all, or nearly all, the food it contains suitable for their existence.