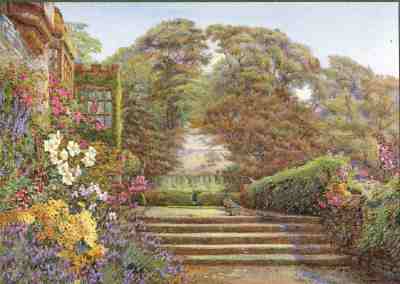 Terrace and Steps at Haddon Hall, Derbyshire
from a watercolour by E. H. Adie

Haddon Hall is the seat of the Dukes of Rutland. It overlooks the river Wye and is near Bakewell in Derbyshire. The site has been inhabited since the 11th century but it was neglected in Victorian times. The gardens owe their outstanding appearance to the wife of the 9th Duke who arrived at the Hall at the beginning of the 20th century.

By the early 1900s the gardens were hoplessly overgrown and a massive clearance was required. Yew trees and herbaceous borders were planted and the ivy stripped from the balustrades to be replaced by climbing roses.

The terraced rose gardens were planned to offfer a glorious display of scent and colour in the summer. More than 150 varieties of rose and clematis tumble over buttresses, balustrades and steps. An underplanting of bulbs provides spring colour. Delphiniums provide a colourful display from mid-June below the Long Gallery windows. There are also lawns, herbaceous borders, fountains and clipped yews.

Many people will be familiar with Haddon Hall without realising it. Haddon Hall has been used as a location for several period films and television productions, including including Jane Eyre, Moll Flanders, The Prince and the Pauper, Shakur Kapurs Elizabeth and Pride & Prejudice.