A View From the Far North

Midsummer in an Orkney vegetable garden

I have an eclectic view of gardening: I'll try anything (indoors or out), I'll grow anything, and I don't mind mixing vegetables and flowering plants. But I do avoid chemical fertilisers and pesticides. Like most gardeners in the UK, I'm a self-taught amateur with an interest in growing at least some of our own household food. In fact, a few years ago - when the pictures on this page were taken - I nearly managed to achieve self-sufficiency in most staple crops such as potatoes, root vegetables, salads (over about 7 months), onions and greens.

My love of gardening came from my grandfather who cultivated a typical West Wales miner's garden with its own apple trees, fruit bushes, perennial rhubarb, strawberries and annual plantings of potatoes, runner beans, cabbages and salad plants. These were picked fresh, lovingly cleaned and cooked simply. Can today's purchasers of supermarket vegetables imagine the exquisite taste of freshly picked broad or runner beans, boiled and seasoned with Welsh butter, salt and pepper accompanied only with fresh bread? 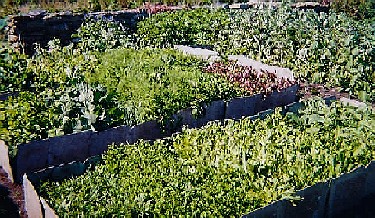 Years later, with those smells and tastes in my mind I can still remember my grandfather's annual routine of digging, sowing, weeding and harvesting. Those were the days of immaculate rows, plants set a fixed distance apart and plenty of bare soil to be seen. Sometimes, in the heat of the summer we would sit on the bench seat next to the blackcurrant bushes discussing the successes and failures. Every now and again my grandfather would jump up and attack some hapless, tiny weed trespassing on the fine-tilled soil.

I wonder what he would have thought of my 21st century Orkney garden with plants packed so close and scarcely any bare earth to be seen. Wales may be wet and windy, and slugs, snails and caterpillars can be a nuisance but nothing compares to the Orkney weather. This is one of those places where the locals say that if you don't like the weather just wait 15 minutes - or is it 5? The islands are low-lying and located in northern latitudes between the Atlantic Ocean and the North Sea. Weather conditions are dictated by wind strength and direction. Sometimes the weather whips across the huge skyes and the ocean so fast it provides an alternative to television. In the early spring, one day can see periods of sunshine, fog, cloud, rain and sleet alternating. The prevailing winds are southwesterly - mild and damp. But northerly and easterly winds bring cold air from the Arctic and Scandinavia. Nothing survives without shelter.

The daylight is long and powerful in mid-summer and plants grow at an astonishing rate. They are planted later and develop more slowly at first than their counterparts in the south, but as Southern England languishes in a hot and dry, almost Mediterranean summer, Orcadian plants grow vigorously.

The plants that do well are surprising and unpredictable. Edible rocket, grown from Italian seeds flourish to the point that they provide a mini-hedge into the early months of winter. Their thin leaves let the wind through and yellow flowers dance above them, happily self-seeding. Mint goes suitably berserk and several varieties of cabbage flourish. Kale, of course, is traditional and the young leaves of the modern varieties cook easily and have fine flavour. Kerrs Pink have been consistently successful 'tatties' and are plentiful