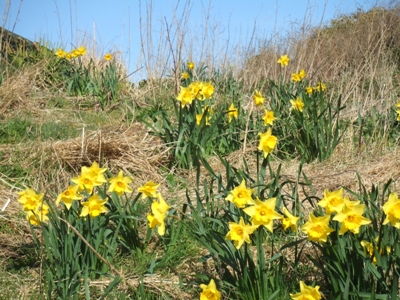 What are bulbs and how do you distinguish them from corms, tubers and rhizomes?

"A true bulb is composed of leaves modified for storage and attached to a basal plate that can be considered a squashed stem." The plate (flattened stem) produces roots and forms the base for the leaves which are fleshy as they are filled with the plant's food reserves. The leaves can be arranged in different ways:

Lateral bud arise between the leaves in a bulb to form new bulblets that succeed the 'parent' bulb when it dies.

Crocuses and gladioli come under the blanket term of 'bulbs' but they are not true bulbs because they are corms in which the base of the stem is used to store food. Corms have a distinctive shape - 'rounded, flattened on top, and slightly concave on the bottom', according to Bryan. If you cut a corm open you will find that it appears quite solid, unlike the onion-like characteristics of a true bulb.

New corms (cormels) form on the top of the old corm and there may be many of them.

Likewise, the iris is not necessarily a true bulb (although some members of the genus are) because some irises are rhizomes. A rhizome is 'a creeping stem swollen to enable foods to be stored.'

Bryan cites the begonia as an example of a tuber - 'an underground branch modified for storage and capable of producing bulbs and roots.'

What these different types of storage arrangements have in common period is, for a majority of species, a dormant period. According to Bryan:

"This period in a bulb's life cycle is brought about by prevailing growing conditions, such as the heat and dryness of summer or the extreme cold (accompanied by snow) of winter. It is doubtful, however, that all activity actually stops, since many unexplained changes take place inside the bulb during this dormant, or resting, stage."

Dormancy is affected by the presence of moisture and also by the bulb's internal clock.

Smart Bulbs
How deep should bulbs be planted? According to a study published in the Journal of the American Society for Horticultural Science it may not matter because bulbs can move themselves deeper into the ground, seemingly in search of better, moister growing conditions.